You are here: Home » ABOUT BENNIE & MARTHA 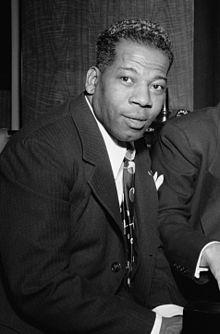 Benjamin’s early life was difficult as his father died when Bennie was an infant and changes in the shipping industry, hurricanes, and WWI pushed the economy of the Virgin Islands into decline. After graduating from Virgin Islands High School in 1925, he abandoned early hopes of becoming a minister for lack of tuition to enter seminary and studied to be a tailor and cabinetmaker. In 1927 (ten years after the U.S. purchase of the islands from Denmark had made emigration to the mainland easy), he moved to New York City in search of opportunity.

Benjamin had taught himself banjo as a youth, but now added guitar to his skills at Hy Smith’s School of Music. After six months of training, he began performing in dance orchestras, enjoying a five-year stint with Napoleon’s Orchestra at the Savoy Ballroom, touring with the vaudeville act Olson and Johnson, and playing at the Cotton Club. He developed a distinctive solo style that interspersed chords in his melodic lines. Despite these gigs, he worked odd jobs to stay afloat financially and struggled to make a living.

About this time, he tried songwriting in the mainstream Tin Pan Alley idiom, but found no success for a decade of effort—shopping what would become his first hit around to publishers for several years to no avail. Benjamin joined with Sol Marcus in 1938 and along with Eddie Seiler and Eddie Durham revised his long suffering tune to create the smash hit “I Don’t Want to Set the World on Fire” in 1941. Introduced by the African American group Harlan Leonard and his Kansas City Rockers, the song next hit #4 on the pop charts as performed by the Ink Spots and rose to #1 when Horace Heidt’s version captured the mood of the country after the Pearl Harbor attack. It won a 1941 Billboard Magazine “Top Songwriter’s Award” for its creators. Seiler, Marcus, and Benjamin hit #1 again soon after with “When the Lights Go on Again (All over the World),” as performed by Vaughn Monroe, which used the imagery of World War II blackouts to express the hope for peace (1942).

Benjamin enlisted in the United States Army as an “Entertainment Specialist” on 5 Sept. 1942 and was stationed at Mitchel Field in New York. During three years of service he played guitar and produced camp shows (writing songs, casting talent, directing, etc.). He was honorably discharged on 21 Sept. 1945.

Benjamin reportedly had a hand in more than a hundred songs that registered on the Billboard charts. He approached his work as a professional art, observing that “Songwriting is a craft, an art, a gift like a vocation to medicine or law or any other profession” (Virgin Islands Daily News, 29 April 1968). His songs have little direct reference to African American idioms, but are rather in the popular mainstream styles of the day. His lyrics focus on the subject of love with an undercurrent of innocent sensuality. Like other Tin Pan Alley, dramatic emphasis has shifted to the chorus, with a brief introduction to set the stage. Unobtrusive rhyme and clever word choice enchant the listener, while his tuneful melodies are easily sung by amateurs, but have a subtlety that engages professional interpreters. Rhythmic variations keep the melody sounding fresh as it spins out with gentle syncopations and triplet inflections. Wide intervallic leaps are used with deliberate expressive intent, especially at the song’s climax. In sum, Benjamin’s songs are masterful realizations of the popular idiom.

Evoking classic themes of love and capturing the energy of their time, Benjamin’s songs often appear in movie soundtracks. For example, his song “Anyone (Could Fall in Love with You)” was sung by Elvis Presley in the 1964 movie Kissin’ Cousins. That three and four decades later, films continue to include his songs, especially “Wheel of Fortune” (Household Saints 1993; L.A. Confidential 1997), “Don’t Let Me Be Misunderstood” (Layer Cake 2004; The Banger Sisters 2002), and “I don’t Want to Set the World on Fire” (Iris 2001; Ask the Dusk 2006), reveals their continuing ability to reach audiences.

By 1965 his company was known as Benjamin Publishing and by 1968 Benjamin was sole owner of Bennie Benjamin Music. He was a member of ASCAP, the National Academy of Popular Music, as well as the Songwriters Guild of America. He was on the Council of the American Guild of Authors and Composers. As he became more affluent, Benjamin invested to support the Virgin Islands, buying real estate and becoming the largest stockholder in the West Indies Bank and Trust.

As he became successful, Benjamin sponsored benefits for chapters of the March of Dimes, the Red Cross, and various leagues and associations such as the Queensboro Tuberculosis and Health Association. In 1963, New York Congressman Adam C. Powell persuaded President John F. Kennedy to appoint Benjamin as member of the Board of Directors of the Virgin Island Corporation. In the 1980s, he founded The Bennie and Martha Benjamin Foundation, which continues to support medical training and clinics in the Virgin Islands. In 1992 the foundation began awarding annual scholarships to students pursuing careers in health care who committed to working in the islands. Benjamin died after a long illness in New York City at the age of 81.

By Mark Clague, Associate Professor of Musicology and Director of Entrepreneurship and Career Services, University of Michigan, School of Music, Theatre and Dance